For this lab you will implement multiple user space drivers, including drivers for the Xilinx GPIO and interrupt controller IP cores. You will use these drivers to then implement a simple real-time clock application, that will print the current time, using printf(), in a terminal window that is connected to the PYNQ system.

Review the Software Stack that illustrates how the different software modules you will create in this class will work together. This will be discussed more in class.

For this lab, the complete hardware system will be provided; you shouldn’t make any changes to the hardware. You should review the hardware system before you start coding the lab. Particularly look for the GPIO modules that interface with the buttons and switches, and look at how the interrupt lines are connected to the Interrupt Controller.

You will need to write drivers for the buttons and switches. Both of these are connected to the hardware using an AXI GPIO module. Read the AXI GPIO documentation (link on the hardware system page).

You will need to write a driver for the AXI Interrupt Controller. Read the documentation (link on the hardware system page).

The drivers you write in this lab will run in user space; however, from user space, you are not permitted to interact directly with hardware devices. As shown on the Software Stack page, there is a lightweight kernel driver for the GPIO modules and Interrupt Controller, called the Userspace I/O (UIO) driver. This provides a bridge that allows you to access these devices from user space. You will need to read about the UIO.

Complete the real-time clock application. Some starting code is provided to you: clock.c

Once the above is working, complete the final requirement:

Interrupts can be extremely tricky and frustrating to deal with so I strongly suggest that you read the relevant documentation carefully and take an incremental approach. In particular, it is quite useful to write simple programs that indicate that the interrupts are working in the first place. Getting the interrupts to do anything at all is more than half the battle. I did the lab in the following order: 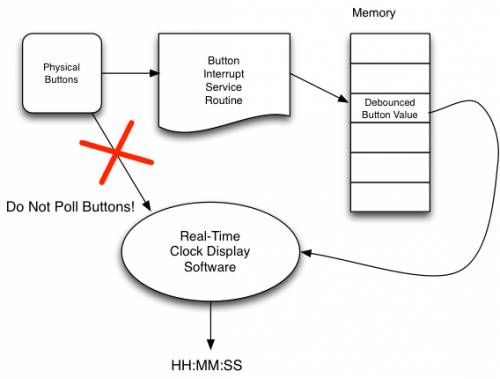